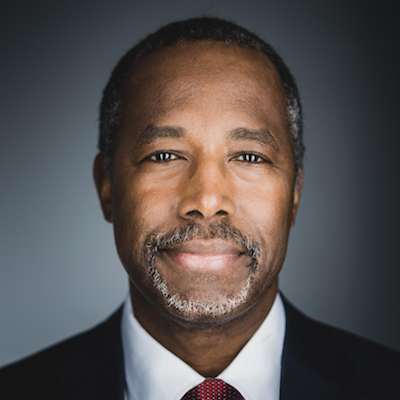 Secretary of Housing and Urban Development

Benjamin Solomon "Ben" Carson, Sr. (born September 18, 1951) is a retired American surgeon.Born in Detroit, Michigan, and a graduate of Yale University and the University of Michigan Medical School, Carson has authored numerous books on his medical career and political stances, and was the subject of a television drama film in 2009.

He was the Director of Pediatric Neurosurgery at Johns Hopkins Hospital in Maryland from 1984 until his retirement in 2013. As a pioneer in neurosurgery, Carson's achievements include performing the first and only successful separation of Siamese twins joined at the back of the head, pioneering the first successful neurosurgical procedure on a fetus inside the womb, performing the first completely successful separation of type-2 vertical craniopagus twins, developing new methods to treat brain-stem tumors and reviving hemispherectomy techniques for controlling seizures. Carson became the youngest chief of pediatric neurosurgery in the country at age 33. He has received more than 60 honorary doctorate degrees, dozens of national merit citations, and written over 100 neurosurgical publications. In 2008, he was bestowed the Presidential Medal of Freedom, the highest civilian award in the United States.Carson's widely publicized speech at the 2013 National Prayer Breakfast catapulted him to conservative fame for his views on social and political issues. On May 4, 2015, Carson announced he was running for the Republican nomination in the 2016 presidential election at a rally in his hometown of Detroit.

In March 2016, following the Super Tuesday primaries, he suspended his campaign and announced he would be the new national chairman of My Faith Votes, a group that encourages Christians to exercise their civic duty to vote.